Here is a lovely story of 7 year old Karan who was operated on at Public Health Center India, thanks to our Crowdfunding Partner, samahope.org.

“7 year old Karan was operated for Ventricular Septal Defect on 20th May. At the time of his discharge, his father Mr Ezhumalai told the team at the hospital his life without a mother from the age of 5 and full of trials, and no education. Whilst his half brothers and sisters became graduates. When he was 21 there was an arranged marriage & was sent out with his wife without a pie. For a living he started on part time jobs managed selling odds. He and his wife built a house from these earnings. With 2 children he started to live a contended life. Now the biggest blow of all came. He was told that his child Karan had a hole in the heart which could be closed only at a cost of Rs 2, 00,000/$3150 This shattered the entire family. They decided to sell their house. Karan was detected to have VSD when H4H team went to Perambalur for a camp. He managed to come to the camp from his remote village. He came for surgery and is waiting to be discharged. When he was told that SAMAHOPE was responsible for the surgery conducted, his eyes filled with tears and he said “Please tell them that I owe a lot to them. They have restored not only my son but also my house which is the only fruit of my labour. This is the only kindness I have felt in my all-hostility life. “ 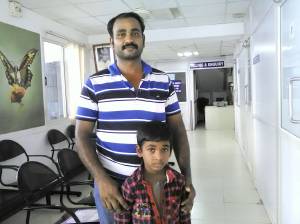 Thank you Public Health Center for giving us permission to share this beautiful story to our supporters.